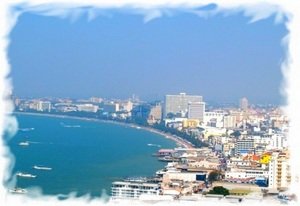 Webcams Pattaya, allowing online to enjoy the views of this famous resort, aimed mainly at the famous streets of the city and the popular beaches and provide a unique opportunity to admire the rolling waves, slowly walked along the beach and promenade with tourists and locals, swaying palm trees and the wind other exotic trees. Also on the site are presented online webcam Pattaya that are installed on city streets and some bars.

I draw your attention to the fact that the length of daylight hours in Pattaya because of the location of this resort in the tropics is much smaller than many of us are accustomed to. The quality of the pictures online with webcams Pattaya at night is not as high as during the day, especially when the objects, which are aimed at the camera, poorly lighted. Also, be aware of the possible and the difference of time zone between Thailand and your location. Ie if you live in Europe or one of the countries of the Western Hemisphere, an attempt to assess the situation at the resort with one of the webcams Pattaya in the evening may fail due to the fact that already in Pattaya late at night.

A detailed description of each of the online webcams can be read directly under it. We try to place on this site, only those cameras that transmit images of acceptable quality and are working around the clock, or a strictly defined schedule. If you do not yet have an exact idea of the main urban areas of Pattaya, I recommend you read the article «Areas of Pattaya. Description and map. » Also, in order to better represent the location of each of the online web cameras, you can see a selection of city maps indicating areas and hotels «Fresh Map of Pattaya»

To start the broadcast, click on the icon «Play» (triangle) in the center of the player. Also, you can deploy the image to fill the screen, but it can lead to an increase in load time video stream. If playback does not occur, or a warning about the absence of the right plug-in, I advise you to get acquainted with the ways of solving the problem on the page «Live webcams in Thailand.» Happy viewing!

This webcam is mounted on a high-rise hotel Cape Dara Resort, located on the shore of the Gulf of Thailand near the northern part of Pattaya. The camera focused on Wong Amat beach, and provides an excellent overview of the coastline, including the entire area for swimming, a small pier, green areas on the beach and a chain of modern high-rise buildings. A distinctive feature of this webcam in Pattaya is a periodic change of perspective: a general view of the beach can be replaced by a more detailed image of the central part of the beach (any patterns in the frequency shift angle I had not noticed, usually 2-3 minutes).

Confirmation that the camera is broadcasting online is at the top of the image information line with the current date and time. To prevent the effect of «blinding» in contact with the web camera to direct sunlight, use a special filter, which leads to some deterioration of picture brightness, ie, environment turns darker than it really is (slightly overcast day, it seems, although it is not). At night, the camera transmits the image in black and white.

Like the previous webcam, this is broadcast from the top floor of the hotel Cape Dara Resort, but rolled in the opposite direction — the main beach town of Pattaya, having a length of about 3 km. With this online webcam you can admire the rolling waves, multiple high-speed boats, jet ski and banana on which ride prefer leisure tourists. You can also see lovers admire the sea and the central beach of the resort from the air, hovering above the water surface by parachute. In the background can be seen the main city of Pattaya Pier, where you can quickly get to the island of Koh Lan.

Live webcam overlooking the central Pattaya Beach also periodically change the angle, so you can look not only at the beach as a whole, but also in its central part in a detailed drawing. The very large increase in the frame is clearly visible tower at Pattaya Park, located behind Cliff near Jomtien. In contrast to the previous one, at night, this unit remains in the color image transmission and can admire the colored lights of the night city in the upper part of the player when activated view shows the current time, ensures that broadcast, online or with a minimum of delay.

Thank asiasabai.ru site for access to the placed higher on the page two webcams Pattaya!

New online webcam in Pattaya is set in one of the skyscrapers in the southern part of the resort and allows to survey the terrain in the area of one of the cleanest beaches in the city Pattaya — Jomtien (Jomtien beach). Frankly, the viewing area itself is not too big, but apart from the trees on the coastal street and the sea, you can see the tower of the hotel Pattaya Park, where you can go down on the bungee for a fee. Unfortunately, with this camera can not be so to watch the sunset, quickly sliding down behind the horizon in islands, located in the vicinity of Pattaya, as it could be done, when the camera was installed in the southern part of Jomtien and turned towards the sea. At night, the web camera switches to black and white mode.

Live webcam in Pattaya, located in the alley LK Metro (Soi LK Metro), which is a relatively short time has become a rival of the famous Walking Street Resort — Walking Street. In an alley a large number of Go Go bars, and the prices for drinks and other services more democratic than in the WS, so that experienced travelers are increasingly choosing exactly the specified lane for a pleasant stay at the resort. This webcam Pattaya is broadcast around the clock overlooking the popular Go Go Sugar Sugar. Lane comes alive after dark, but during the day it fairly busy. Also in the foreground can be seen a small motorcycle taxi parked under cover. The image from the webcam is of good quality, both in detail and in color. 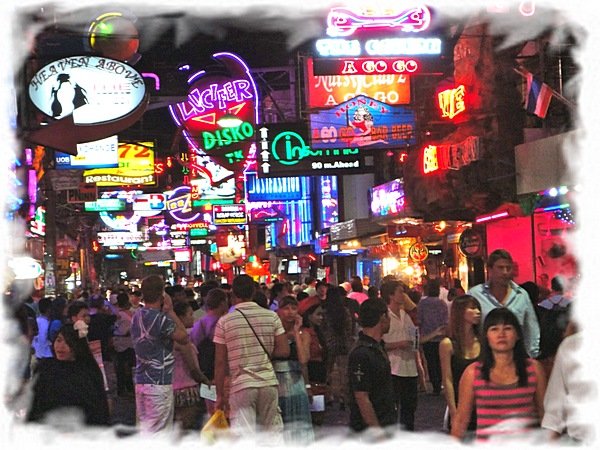 ★ You waited this and not once asked me about it in the comments and emails, and this finally happened. Since 30-09-2015g i added online broadcasting with new web cameras Pattaya, located in the famous Walking Street. For correct operation of the webcam and the convenience of users, cameras are placed in a separate page site, go to the link that you can see above. New webcams successfully replaced the previously located on the same page of the camera FLB bar that stopped working a long time ago and which is different from the other cells of the resort by the presence of the sound track. As a result, it was possible not only to see what is happening on Walking Street, and hear everything that happens in the vicinity of the chamber and at a distance from it. Two new cameras are located in the central part of Walking Street and pass a good picture of what is happening on this street. 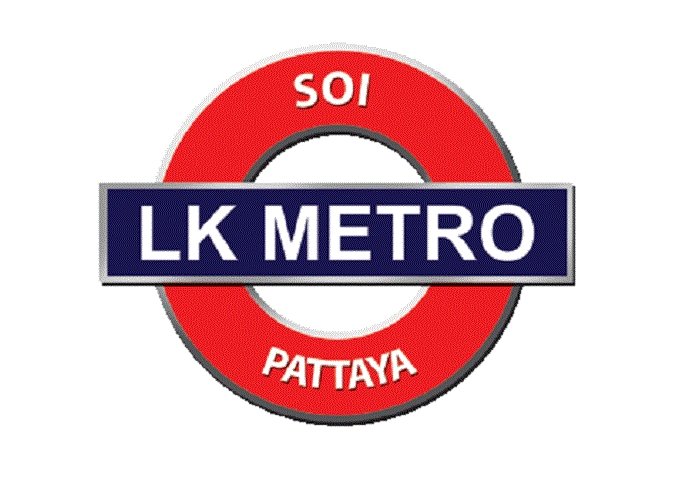 ★ In the above lane LK Metro has another webcam in Pattaya, but joint broadcast images from both cameras on the page is not quite correct, so everyone watch the active life on the other side of the alley can do it on a separate page. For those who have not yet attended Lane LK-Metro and is not what it is and where it is briefly explained that this small, in general, the lane over the last few years has become a real center of nightlife in Central Pattaya (remember the famous Volkin Street is all taki already in South Pattaya, as described in the article «Pattaya area: description and location on the map»). In the foreground of this online web cam can see Pattaya A Go Go under the name «Champagne» (Champagne), ie one of the most popular and well-known institutions of the alley. The camera operates around the clock, but during the day it is a common street Pattaya and only after dark lane changing, light up the neon signs and the number of pedestrians increases manifold. 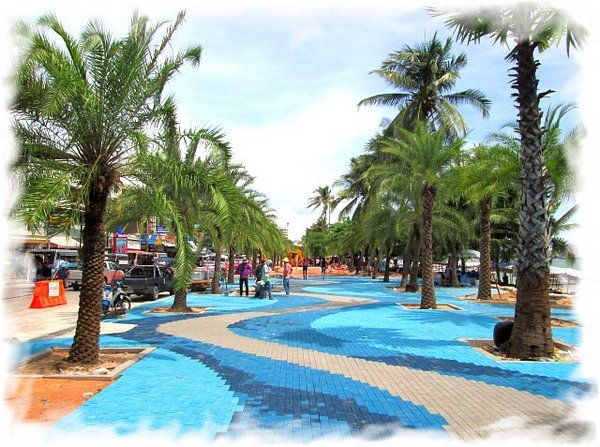 New webcam Pattaya installed near the famous street Beach Road (the Beach Street, «Bicske»). Also on a separate blog page because of the impossibility of correct broadcasting in conjunction with other cameras this collection. The camera operates around the clock and provides an overview of Pattaya Bay, beach and hotels near the street. With high-quality color reproduction, this webcam lets you not only see what is happening in the central part of the Beach streets of the city, but also to get an idea about the weather in this area of Pattaya. Yes, I happened to mention it was part of the city, not the resort as a whole, because the weather in Pattaya is very original, and if in the north of the city is a little rain, and in the central Pattaya cats and dogs in the area’s main pier can sunshine. Do not believe me — see for yourself, and leading online broadcast webcam Pattaya help you with this. 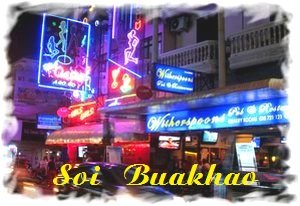 ★ A recently installed webcam Pattaya’s famous Soi Buakhao lane — Soi Buakhao, which is becoming increasingly popular entertainment center not only for those who choose this relatively inexpensive area for short or long stays at the resort, but also for all those who are tired of a few from Walking Street and the many bars on the side streets adjacent to the Beach Road (beach street). This camera is installed on the building of the popular Asia Backpackers Hostel and is directed toward the street in Central Pattaya (Pattaya Klang). Along with the lane LK-Metro, Soi Buakhao gradually becoming a new center of nightlife in Pattaya, while many are attracted not only still slightly lower prices than Walking Street, but also more relaxed atmosphere, because in contrast to the main «entertainment kilometer» on Soi Buakhao rarely drop packet tourists and couples with children, which are increasingly seen on Volkin Street. 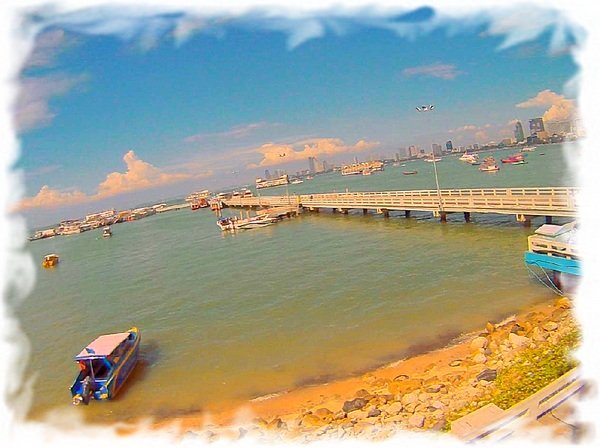 ★ New webcam Pattaya aimed at the city’s main pier in Pattaya — Bali Hai, from which depart daily spidboty, boats and ferries to Koh Lan in the Gulf of Thailand and other nearby islands. The camera operates around the clock and allows you to always determine exactly what a given time weather near the town pier. Sometimes it is very helpful in the planning area and allows you to decide whether or not to go to the island of Koh Lan or better to stay in Pattaya and do things that do not require a finding in the open air. Unlike other web cameras in Pattaya, this is not a full-fledged online camera, because in the playback window you can see that is not broadcast the video stream, and replacing each other every few seconds, static images, which, however, give a good idea of the number of people on the pier , the color of the sky, the time of departure of boats to Koh Larn, etc.