How to get from Bangkok Airport to Pattaya — all options 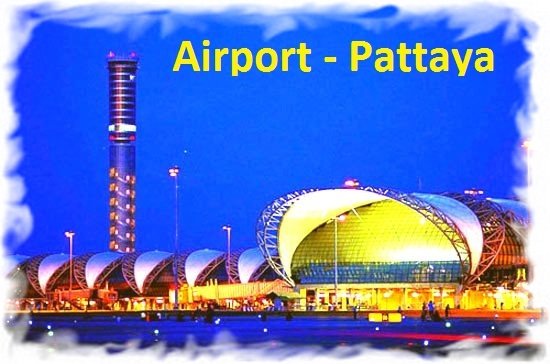 How to get to Pattaya from the airport? This question often arises in travelers who will organize the first independent holiday in Thailand and who want to choose the best variant  along the route from Bangkok Airport to Pattaya a quick, comfortable and affordable. In this article I will talk about some of the most convenient and affordable way to enable you can spend minimal cost money and time for overcome the route between two airports in Bangkok and Pattaya.

How cheap to get to Pattaya from Suvarnabhumi Airport.

Due to the fact that the main airport in Thailand is between Bangkok and Pattaya, it makes sense to get to the resort right after the arrival in the country, bypassing visit the capital (unless, of course, her visit is not included in your plans for the first few days of rest). So you’ve arrived at the main airport of the country, saving a lot of money due to the fact that benefited from practical advice in the article «How cheap to fly to Thailand.» Get to Pattaya from the airport can be specified in two repeatedly proven ways: by bus and taxi. The plane I do not even consider because distance between Suvarnabhumi and Pattaya only 110 km.

The easiest way — after the arrival and passage of all procedures down to the first floor Suvarnabhumi Airport (Level 1). Between the outputs of the street №7 and №8 posted ticket office where you can purchase tickets for a comfortable bus to Pattaya and costs 134 baht. The journey time is about 2 hours, with a final stop — the bus station on the south Pattaya, Jomtien (crossing the streets  Tappraya and Tepprazit). Bus service on the specified route are carried out by Airport Pattaya Bus. Landing in blue bus of company №389 and disembarkation of it, is near the exit №8, under a canopy. Personally, I have used this bus two times in the opposite direction, ie, from Pattaya travel to the airport: I liked it. 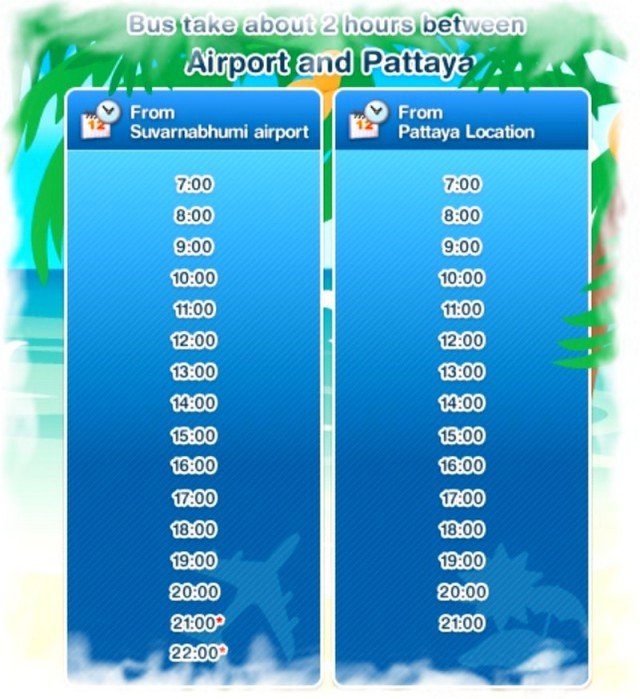 Bus timetable Suvarnabhumi Airport — Pattaya bus company Airport Pattaya Bus — table from the official website of the company (picture is clickable). The site also states that the buses from the airport to Pattaya, departing at 21-00 and 22-00 come from North bus station, not the South. The site also contains ticket cost 134 baht, although at the beginning of February 2014 he was worth just 124 baht. I draw your attention that the schedule may change (during the low season not 16 flights a day,  can only be performed 10 flights, ie the interval between flights in both directions is increased).

The disadvantage of this method to get to Pattaya from the airport by bus is the fact that in the desired time on the specified bus can not stay places. Will either have to buy a ticket on the next flight and wait 1-2 hours (depending on time of day), or use another bus company — Bell Travel Service Co. Buses of the company not less comfortable, but the fare is 250 baht have when buying at the box office and 230 baht when buying through the web site. But there are two big advantages: firstly, the quoted price includes delivery, not only to the northern Bus Station in Pattaya (near the intersection of Sukhumvit highway and North Street), but also on the delivery of Mini Bus directly to the entrance of your hotel.

This is very handy when you have oversized baggage and you already know where you are going to stay in Pattaya. Transplant of a large bus for Mini Bus carried out directly on the northern bus station in Pattaya and pay extra at the same time do not need anything. The second advantage of the bus company if you want to get to Pattaya from Bangkok airport is the presence of the official website, with which you can pre-book a ticket for the desired time. Company Website — belltravelservice.com You should not be afraid that because of flight delays or long passport control is likely to be late for your flight. The company promises that in this situation, you can easily get to Pattaya for the next flight. You can buy a ticket again near the exit from the airport №8 on the ground floor. 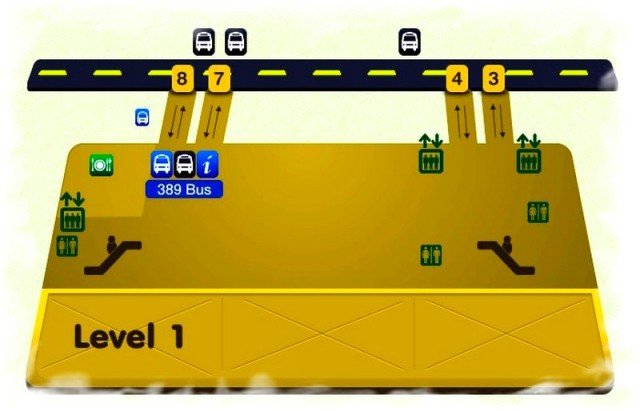 The landing place on the bus to Pattaya In Suvarnabhumi Airport

Another way to make way from Bangkok Airport to Pattaya are buses departing from the bus terminal, which reach from Suvarnabhumi can take a free shuttle bass airport in 10 minutes. Bus services to Pattaya performed several companies, so the cost of one ticket ranges from 106 to 250 baht. The first flight to Pattaya goes to 06-30 in the morning and the last — at 21-00. At the same time cheaper buses with red stripes on the sides take you to the North or South Pattaya bus station, and on the way will make frequent stops, picking up passengers for free. Most expensive as buses for 230-250 baht dovezut directly to the chosen hotel (with a transfer by minibus to Pattaya).

Taxi from the airport Suvarnabhumi (Bangkok) to Pattaya

Due to the fact that the buses from Suvarnabhumi — Pattaya to transport passengers only 6-30 am to 22-00 pm, arriving at night tourists have to wait until the morning to the airport, they can spend the night in the capital (the article «How to get from the airport to Bangkok: all ways»), or get a taxi to Pattaya. The latter option is more beneficial if you eat in Pattaya not one, but a company from 3-4 people. By the way, because of the placement in the luggage compartment the gas cylinder, some taxi drivers do not take more than 3 passengers with big baggage.

The fare from the airport to Pattaya now stands at 1000-2500 baht. If you want to get there as cheaply as possible, it is not necessary to order a taxi on the counters in the arrivals area (2nd floor), as it is the most expensive option. Go out on the same floor and negotiate with a taxi driver on their own — a reasonable price in this case 1000-1500 baht (depending on time of day and your bargaining skills). The most sensible option is — up on the 4th floor of the airport (departure zone) and try to catch a taxi at the entrance, which was arrival by tourists from Pattaya. Stay long  time for taxi there prohibited, therefore the driver will be the most accommodating and the probability to take you by for 1000 baht is real. 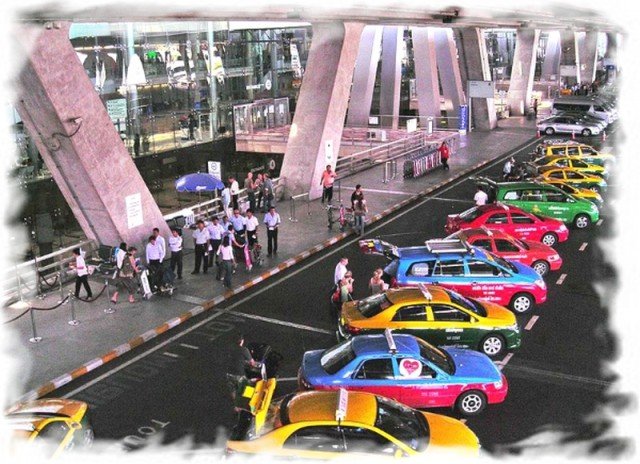 Deciding to take a taxi from the airport to Pattaya, you need to agree on the amount in advance or go strictly by the meter. In the first case you need to immediately specify not only the taxi driver fee for delivery, but also to clarify whether the sum includes travel expenses for the toll road (about 100 baht). If you want to go by taxi meter, also check about the payment of toll road sections and remind to the taxi driver did not «forget» to include the counter (taxi meter). Taxi must arrive take you to the door of the selected hotel.

Another way to quickly get from the airport to Pattaya is the order of transfer from the airport directly to the door of the hotel. Typically, the service can be ordered directly on the site of the hotel where you want to stay. The cost of such services to hotels of different classes may vary significantly, so it should be clarified in advance. Order the transfer, You’re all the necessary procedures at the airport and when you exit the arrival hall (2nd floor of the airport) to consider carefully: the driver must have in the hands of a plaque with your name.

How to get from Don Muang Airport to Pattaya

Despite the fact that Don Muang now can not boast such passenger traffic as the main airport in Thailand, many tourists come to the country it is through this airport, because here you can buy cheap online flights from neighboring countries. Since a direct bus connection between this airport where almost all the budget airlines (loukost) and Pattaya is not have, you need or just take a taxi (the scheme is similar to that in the Suvarnabhumi Airport, only slightly higher price), or to get cheap way, but with transfers.

Firstly, it is possible to make way from Don Muang Airport on the North Bus Terminal in Bangkok, called Mo Chit. Just do not confuse it with the metro station, to which the bus station about 1.5 km. Access to the station from the airport by bus A1, which can sit on near the exit №6. The cost of the trip a little more than 30 baht, only you must say to conductor that you want leave bus on Nothern bus station, because  bus stops only at the request and in the final he stop on metro station Mo Chit. Later you go to the ticket office and buy ticket on next bus to Pattaya (costs  134 baht.) The journey takes about 2.5 hours. Buses on this route with 5-00 am to 19-00 pm. 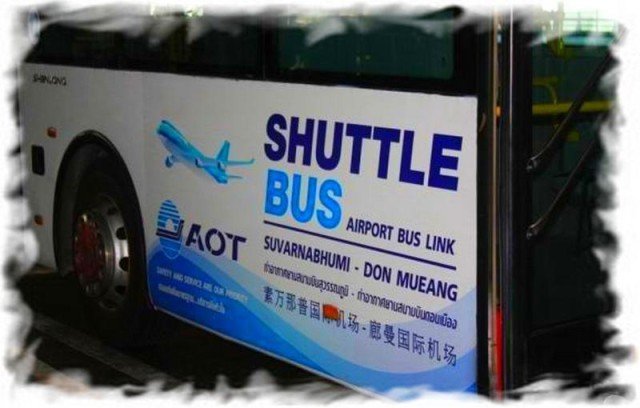 Another option, which allows inexpensive to make way from Don Muang Airport to Pattaya is the following: you must initially go to the main airport (Suvarnabhumi), and then — one of the methods described above. The easiest way to travel between airports are free shuttle bass who work with 5-00 am to midnight. The journey time is 40 minutes, in the shuttle bass have good air-conditioned. Shuttle bus departure from Don Muang is from the arrival area, and Suvarnabhumi Airport shuttle bass comes into the departure zone. Another option: a bus between the airport and the number 554 bus. Interval 30 minutes- 1:00, fare from 34 to 40 baht, the journey takes about 50 minutes (the distance between the airport 50 km).

Hopefully, the information contained in the article has convinced you that to get from the airport to Pattaya not be a problem even for the «beginner» independent traveler with minimal knowledge of foreign languages. If you decide to initially see the sights of Bangkok, and only later to go to Pattaya, I advise you to read the article «How to get from Bangkok to Pattaya», where I described the most convenient and inexpensive options.