How can you saving in travel 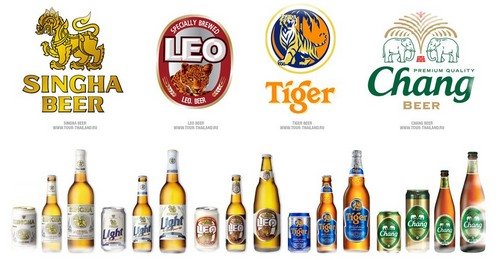 All submitted beer in Thailand can be divided into two groups: local brands and global brands. Here it should be noted that all the beer in Thailand produced in modern plants under strict control of western management, so the quality of any kind is at a high level, and the choice of beer depends more on the taste preferences of the individual. Personally, I really like Thai beer (his local varieties), so I decided to describe the most common and popular brands that are most popular with tourists, and which I personally very like.

I think, to describe the world-famous brand of beer does not make sense, because the taste is almost always the same (in the airplane  i usually need  choose between Foster’s, Heineken and Carsberg), but in Thailand I drink only local varieties. Due to the fact that beer Thai sounds like «beer» problems with acquisition usually not occurs. Cost of beer depends on the place of purchase and size bottles (cans). In Thailand beer is usually available in bottles of 0.33 and 0.64 liters. Price small bottles or jars starts from 35-40 baht. More profitable to buy a big bottle, but not very big beer drinkers often alone can not overpower this volume, the more that local beer strong enough. 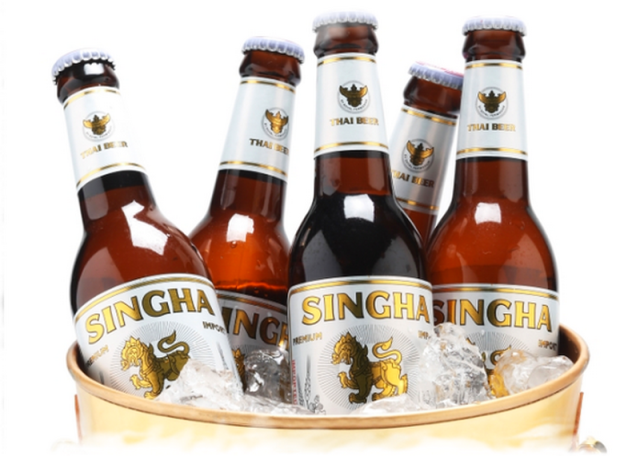 One of the most popular varieties of local beer called «Singha» (Thais say «Sing beer», which means «Lion Beer») is a fortress of 5%. On the white label stylistically figure of the Golden Lion, the top and contains the inscription Singha, made the same golden letters. Beer of the brand with a lower alcohol content — «Singha Light» fortress has 3.5%. Beer aforementioned brands produced for over 80 years (since 1933) of local barley and German hops. This is the first Thai beer, which I tried, but I sometimes think it is slightly bitter, and sometimes — with a slightly sour aftertaste, so I drink it not very often, and  only with beer snacks. However, the volume of consumption of beer in Thailand show that beer is even nothing, so I advise to be sure to try, especially since it costs only a little more expensive than other Thai beers. 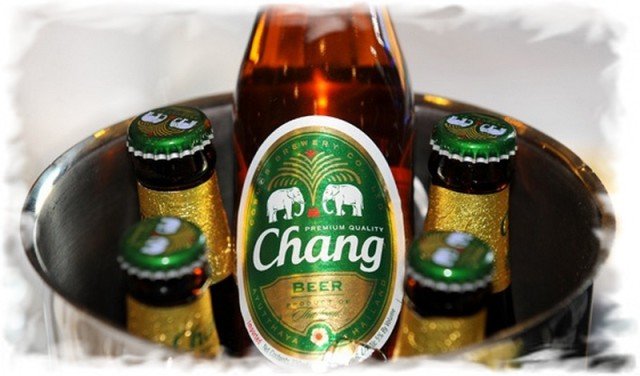 The second popular brand — Chang beer with two white elephants on the label, which is dominated by various shades of green color (depending on the variety). «Chang» means «Elephant», as you probably already know, especially if you read the article «Koh Chang» — Bounty Island in the Siam Gulf». Brand there is a relatively recent (about 10 years) and was founded by beer company with a worldwide reputation — Carlsberg. Classical Chang beer has 6.4% alcohol; «Chang Draught» contains 5% alcohol, and the weakest is the beer «Chang light», which contains only 4.2% alcohol. Personally, I like the most easy Thai beer Chang and Chang Export, which also contains 5% alcohol. I think not lie if I say that in my beer diet the share of beer Chang (especially varieties «Light» and «Export») not less than 50% of the total volume of alcohol consumed Thai beer. And a few cans of this beer, I prefer to drive home from Thailand.
Updated: now my preferences have changed and I drink more in Thailand «Leo beer». 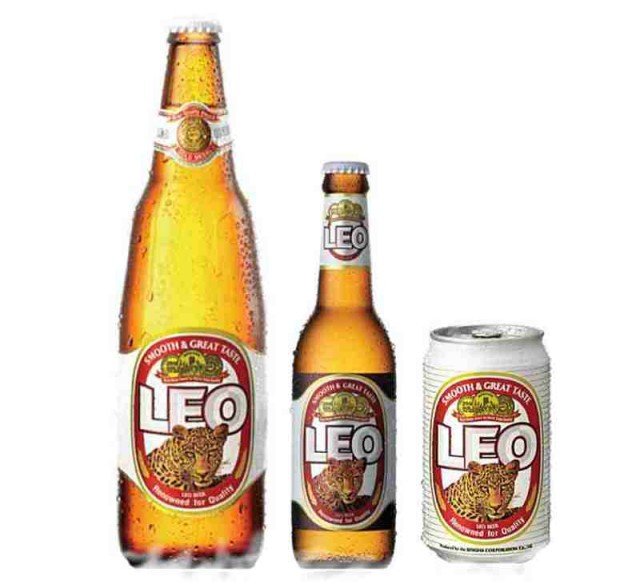 One of the cheapest brands of Thai beer, but somehow less popular and prevalent than the two described above, it is considered beer «Leo». On the label with a predominance of red color depicts spotted leopard, and the center of three distinct large white letters forming the name of the beer «LEO». Interesting enough beer, which has a strength of 3.5%. Beer Leo is not different pronounced taste, it is not bitter and not sour, so it’s perfect to quench your thirst. I personally after one bottle for a long time do not want to drink even a hot day in the sun. Since I am a fan of these beers, I find this interesting brand. Especially because when meeting with the locals (although most women-residents) i call my name how Leo, showing  this bottle. Had noticed that it turns much easier than called full my name (Leonid) that local persons remember and pronounce the difficult (and maybe they just lazy :)). 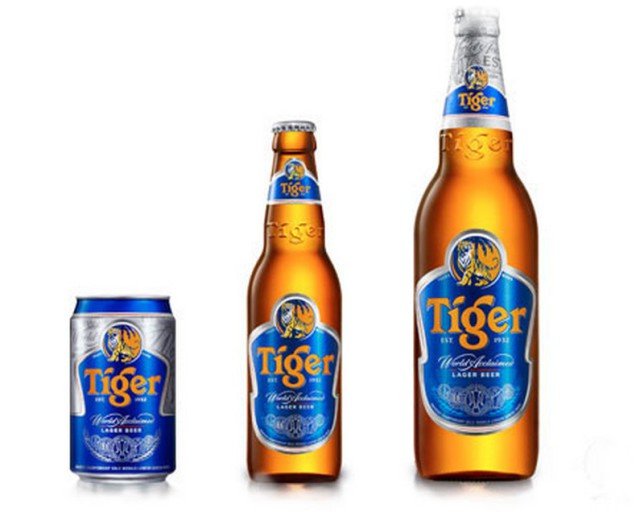 Apparently, because the love Thais to large cats , and may as a tribute to tradition, the stores can be found and beer «Tiger», which miraculously translated as Tiger. Beer is easily distinguished by a bright blue label, which shows at the top of sneaking through the jungle tiger, and bottom — in large print orange is written the name of the brand — Tiger. In general, the Thai beer Tiger soft and perfectly refreshing, but in the aftertaste is slightly felt bitterness. The cost of this brand slightly more expensive Leo, but cheaper Singha and Chang, although in some shops the price of beer Chang was identical. It is worth noting that if you travel to other countries in South-East Asia, it is able to try this beer in Vietnam, Laos, Malasia etc.

Of course, you can try in Thailand and other local beers (Cheers, Archa, etc.), but now to be honest I do not remember very well their taste, which is not very impressed, so I will not give them a description, that no one entered misleading. Will be able to — try other varieties. If you want, you can try others thai beer and to give them a brief description in the comments to this article. 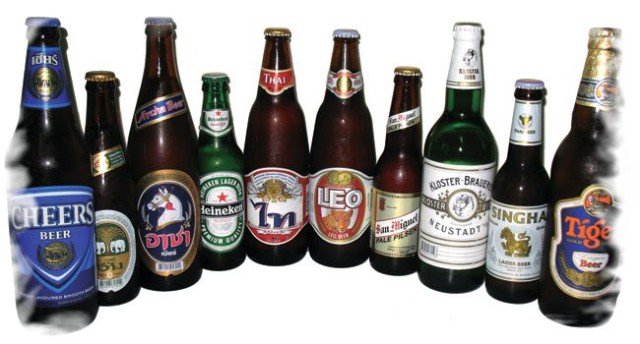 In Thailand have many others brands of beer

Beer in Thailand: where to buy and how to drink

Due to the fact that the classic Thai beer has a sufficiently high strength alcohol and use it, you’ll not only for dinner, but often at the beach should be some caution, because in a hot climate, alcohol can affect the body very quickly. Buy Thai beer can be almost anywhere, but most often it is done in chain stores SevenEleven and Family Mart. As a rule, you can find a beer at the far end of the hall, in the refrigerator. In supermarkets, Tesco Lotus, Big C and other large stores beer (and other alcoholic drinks) is cheaper at 8.12 baht for a large bottle, so if you take a lot — get substantial savings — enough to pay for city transport in Pattaya to this store and come back and save money.

During some holidays in Thailand and other important events (eg, elections), alcohol (including beer) can not be sold at all. If you really want and you live in a hotel room with a mini bar, you can always take it the next day to make up stocks bought in the store (if you, of course, has the meaning of the fact that in the mini bar prices for drinks above somewhere in the 2 times). Pretty funny to watch how in these days close to half of the 12th night in the sealed refrigeration crowd begins to accumulate «hungry», looking at the clock. Also remember that alcohol in Thailand is not sold  from 14-00 to 17-00 on a daily basis. 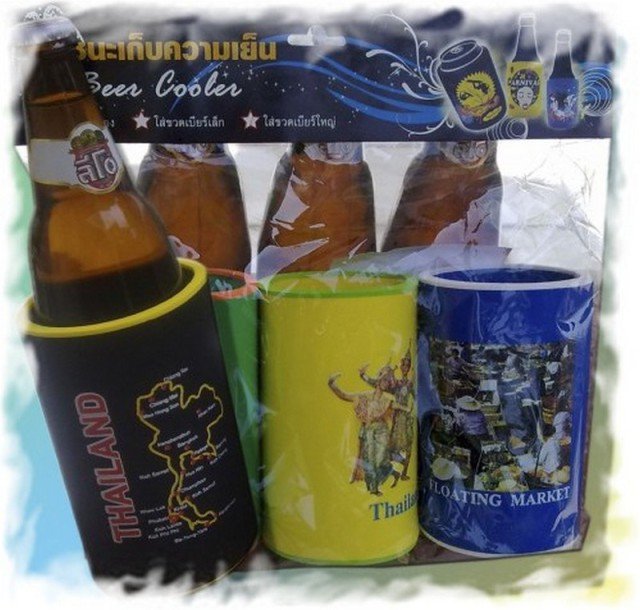 Original holders for beer save your drink cool

Many locals prefer to add ice in beer so that it stays cold longer. Here it should be noted that the usual ice still melts quickly in a hot climate, so the beer becomes watery and loses its taste. A good way out of this situation — a special ice, which is characterized by an increased melting time and does not cost much more than usual. Buy this ice can be in the same 7/11. Another good way to keep the thai beer cold — the use of special holders, in which is inserted  a bottle or can. These holders keep the temperature of beer because the bad skip  warm air and heat from hands. And  these beer holders — a great souvenir from Thailand, which can be used for other purposes at home or give to your friends.