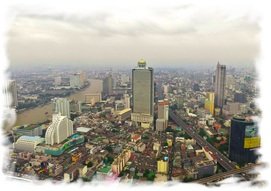 New panorama of Bangkok, lets look at the capital of Thailand completely different perspective — a bird’s eye view. Currently available for panoramic viewing 8 points in Bangkok and the surrounding area, each of which allows you to better appreciate the enormous size of this city, its unique shape, stately man-made structures and natural landscapes. Special imaging technology and software allows you to zoom in and out objects that rotate the camera 360 °, which, ultimately, allows you to experience the personal presence.

Since high-quality panoramic views of the capital of Thailand is available immediately from eight viewpoints, I will briefly describe each of them for those who are poorly versed in Bangkok and has no idea of ​​the whereabouts of particular interest. In principle, some visual information about the location of panoramic cameras at the time of shooting can be obtained from the built-in card, which can be opened by clicking on the appropriate button at the bottom right window of the Panorama of Bangkok. Therefore, I will write briefly about the location and just briefly about what interesting things can be seen in one place or another.

1. View of State Tower skyscraper and the intersection of Silom  and Sathorn

Panorama of Bangkok, which opens on the largest in Bangkok and Thailand building — State Tower, which houses offices, a hotel, condominiums and apartments. The building is easy to «recognize» on a massive golden dome on the roof and neoclassical balconies. Due to its height — 247 meters, the 68-storey skyscraper State Tower is the second highest in Bangkok and throughout Thailand (after the hotel Baiyoke Sky). The building is also known for its 40-story atrium and the highest in the world Sirocco restaurant with room for outdoor, which is available on 64 floors.

2. View of the Rama IX Bridge

Panoramic view of Bangkok near the bridge over the river Chao Phraya, named after the reigning monarch of Thailand. The bridge was built by the cabling technology (roadway of the bridge is supported by a plurality of steel cables (PAST), mounted on high pylons), as River navigation is carried out intense and a lot of support would prevent this. The width of the main span is 450 meters, which makes the Rama IX Bridge one of the largest cable-stayed bridges in the world. The total length of the bridge — 781 meters and its width — 33 meters, so that it is carried out on the six-lane vehicular traffic and paved walkways for pedestrians. The height of the arch of the bridge — 41 meters above the annual average water level in the Chao Phrae, which thanks to the place of shooting a magnificent view.

3. View of the temple of Wat Thatthong in Bangkok

Panoramic view from the helicopter to one of the oldest temples in Bangkok, located in the eastern part of the city not far from the station Ekkamai Skytrain BTS Skytrain in Bangkok and the Chao Phraya River. As for the Temple, the top can be seen only by its numerous buildings under yellow roofs. Perhaps a better way to address this and many other temples of Bangkok and just sights Thai capital — use the program Virtual tour in Bangkok in 3D, with which you can see all the interesting places on the ground level.

4. Panorama of Bangkok near the bridge Dipangkorn

Panoramic view of Bangkok in the district Dipangkorn bridge, named after the grandson of the reigning King of Thailand. The bridge is no less grandiose construction than described above the bridge of Rama IX, is in fact the whole structure connecting with the southern province of Samutprakan Bangkok from two series-connected bridges, having a length of 702 and 582 meters, respectively, at the height of the pylons in the 173 and 162 meters. The bridge was put into operation in 2006.

One of the most interesting and ambitious in scope parks in Thailand, which is still little known to most tourists. Perhaps this contributes to the location of the park Mueang Boran (Ancient City), more than 30 kilometers from Bangkok is directly off the coast of the Gulf of Thailand. The park presents a unique set of architectural monuments of the country’s different eras, many of whom are made life-size, using the original fragments (in cases where the originals have not survived). An interesting feature of the park: in terms of it like a map of the country, and themselves temples and other buildings located on the site of the park, where they are located (or once were) the reality in the country. The scale of the park is huge, so one day for his inspection simply is not enough, even on bicycles and electric cars that can be rented.

6. View of the farm for growing shrimp

Another interesting view of Bangkok, or rather its environs. If I did not read the description, I would suggest that the view of the rice fields. In reality, the numerous creeks, where farmers grow the shrimp, which is one of the most popular seafood in Thailand, and a component of many local dishes. Kind of very interesting, but it is better to see once than hear a hundred times :).

Panorama of Bangkok, an exciting range of sports facilities of the capital of Thailand, the main of which is the National Stadium Rajamangala Stadium: the most spacious in the country (65 000 people) and one of the largest in the whole of Southeast Asia. In addition to football matches (home arena of Thailand national football team) stadium athletics competitions are held and some cultural events. In 2007 the stadium held Rajamangala Stadium Summer Universiade.

8. View of the cargo port of the capital

Panoramic view of the river main cargo port of Bangkok. On the appointment of an object for a variety of easy to guess lined up cranes that produce handling. Panorama of Bangkok from this point is quite interesting: on the one hand, and port number of skyscrapers on the horizon, on the other hand — green area, stretching towards the Gulf of Thailand. And of course the Chao Phraya river majestic, slowly rolling his yellow water across the capital. By the way, in addition to panoramic photos from the air and the virtual tour it is always possible to look at the city in real time, using a webcam Bangkok online, hosted on a separate page.

Instructions for using the program Panorama of Bangkok HD

Already in the preview window of the program you will notice a few tips from its creators —  airpano.ru, allowing easy to get used to the program and watch the panorama of Bangkok with ease.

★ For better viewing, expand the window to full screen. To do this, click on the «Full Screen» in the upper left corner of the program Panorama of Bangkok.

★ For comfortable viewing wait for a full load from the current panorama view. With an average speed of Internet connections is usually enough one minute to 100% load (corresponding to the percentage scale load is displayed at the bottom of the screen).

★ To change the angle of view, zoom in and out of objects in the frame can be used as a mouse or keys on the keyboard of the PC or laptop. When working on a tablet or smartphone to use this hint shown when loading the program in the preview window (usually a camera rotation is carried out by means of the finger on the touch screen).

★ Initially charged panorama of Bangkok is not unique: right near the border of the program window is a column of 8 miniatures, each of which when you click on it takes you to another location in the capital of Thailand and allow to admire the panorama of this Asian metropolis from another angle.

★ To go to the panorama view of Bangkok from a different point, you can use icons and helicopters, which can be seen in the sky over the city. As with the thumbnail at the right border of the window, «visited» your viewpoint marked «check» or «birds», which is very convenient and allows you to navigate every time guaranteed in the new point for further examination of the architectural and natural attractions of Bangkok.

★ For your convenience, many of the objects in the panorama of Bangkok (Thailand) are labeled with their names. To read enough to move the cursor to a question mark «?» and get the information you need. However, some facilities in addition to the name have links to the description on Wikipedia.

★ In the lower left corner of the screen there are additional virtual keys that allow the map of Bangkok and the surrounding area, zoom in or remove objects, read their descriptions on Wikipedia, etc.

I wish you enjoy the panorama view of Bangkok and memorable real journey to the Land of Smiles!