How to get to Bangkok from Pattaya — best variants and prices 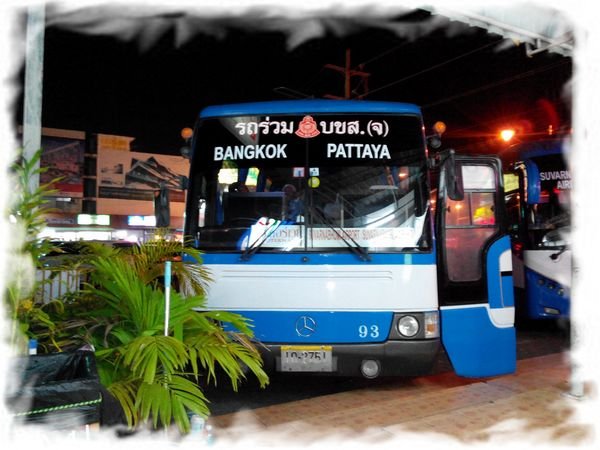 During a holidays in Pattaya, many tourists will sooner or later face the need to travel to Bangkok to visit the capital’s attractions, shopping malls, airports, etc. The Way to Bangkok from Pattaya  can be easy, because the distance between the two cities a total of about 150 km, so a trip to the  bus takes an average of about two hours, and a taxi ride takes you less time. In the article describes the variants and the cost of travel from Pattaya to Bangkok and i provide practical advice which variant of transport is better to choose  in a particular situation.

From Pattaya to Bangkok by taxi — advantages and disadvantages

One of the easiest ways to allow all independent travelers to get from Pattaya to Bangkok is a classic taxi in Pattaya. The disadvantage in this method, only one — the higher price, especially if you are traveling alone and are not able to find travel companions, with whom one could share the cost of the road. Find a taxi in Pattaya is easy, even if you did not know English and, especially, the Thai language.

Firstly, you can order a taxi in most hotels and guesthouses resort. Even if you do not live in a luxury hotel near where the parking lot is almost always «on duty» at least one taxi car, just ask at the reception and tell the two little words «taxi Bangkok» and you will be offered this service. Typically, the cost of the trip to the airport, to the line Skytrain or to one of the bus stations (mostly Eastern Bus Terminal Ekkamai in Bangkok) — will be 1,000-1,200 baht. If from you require more — or trade, or look for a taxi elsewhere. 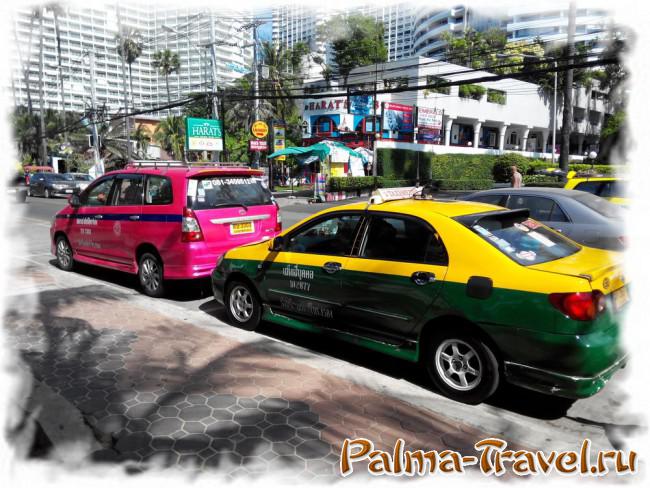 Classical taxi on the street Jomtien Beach in Pattaya

This place may or parking at one of the malls in Pattaya, for example, Royal Garden Plaza, where passengers are usually a number of taxi cars, numerous street or point of offering taxi services. In the first case also need to specify in advance the cost of travel and who will pay for the toll roads, and the second being used to travel to the airport and has a fixed value (just in case you can bargain). For more information on how to get to the Suvarnabhumi and Don Muang using taxis and other modes of transport, in the article «How to get from Pattaya to Bangkok airport.«

Advantage of the method is possible to note its speed (though not much faster than a normal bus), slightly higher level of comfort and the ability to go from Pattaya to Bangkok at any time, as with buses and Mini Bus napryazhenka night, and your flight can be early in the morning or in the middle of the night. Keep in mind that the taxi in Thailand are usually running on liquefied gas cylinder which occupies a lot of space in the trunk. Therefore, more than three passengers, especially with luggage, taxi drivers do not want to take.

From Pattaya to Bangkok by bus — cheap and convenient

One of the most affordable, quick and practical way to get to Bangkok from Pattaya alone are buses that from early morning until evening shuttle between the capital and the bus stations of the resort. In the article «Bus stations  in Pattaya — detailed review» I already gave a description of these objects and how to quickly and cheaply get to them from different parts of the resort. Therefore, below, to avoid repetition, will be given advice which bus station  is better to use  in a particular situation and the cost of travel from Pattaya to various locations in Bangkok. 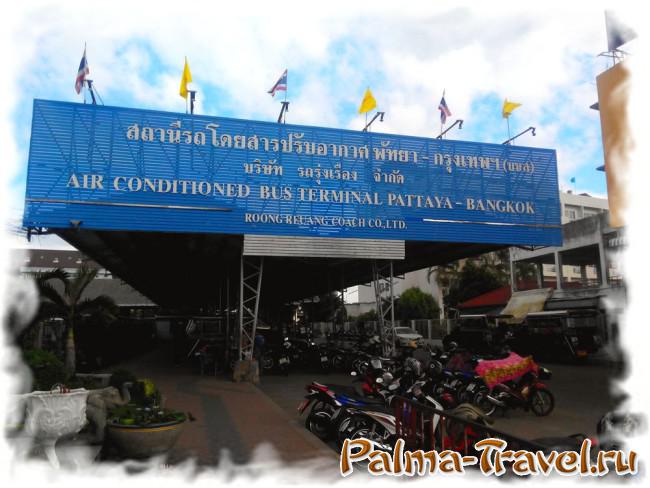 If you are going to get to one of the bus stations in Bangkok on the bus from Pattaya, your unconditional choice — Northern Bus Terminal in Pattaya where buses depart immediately for all metropolitan bus stations. You just have to study any map of Bangkok with hotels and attractions and to understand what area you are interested in more than just, ie from some of the station in the capital, you will be faster and easier to get to the hotel booking, shopping centers or other object. If not much difference and would still need to use the local transport — the easiest way to get to the bus station Ekkamai (Eastern Bus Terminal), because next to him is the same name Skytrain Station Bangkok BTS Skytrain. Some distance by taxi or motorcycle taxi will have to do to get to the subway BTS SkyTrain from the Northern Bus Terminal in Bangkok (Mochit Bus Terminal). 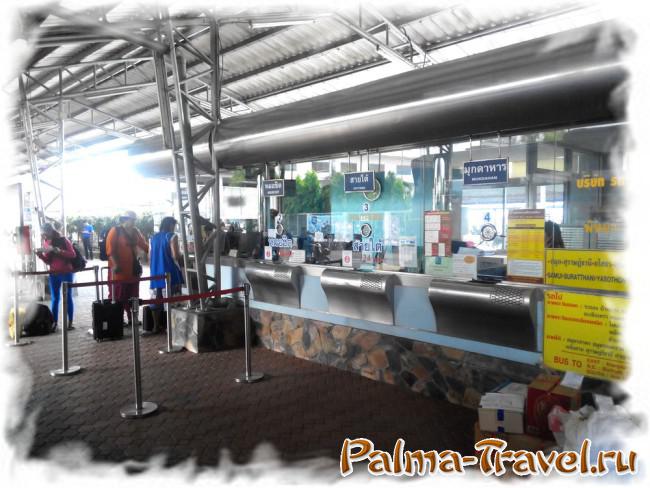 Also, this way can be done on foot, having a little along the highway and going through a rather big Chatuchak Park in Bangkok. Southern metropolitan bus station located in the western part of the city, away from all the metro lines, but it is easily accessible from Pattaya in the case where you want to go to one of the southern resorts of Thailand — Krabi, Phuket Island or Coconut Island Samui.

Arriving at the bus station in North Pattaya, you must purchase a ticket to one of the three banks under a canopy (see. Photo above). Each window sells tickets to a separate bus station in Bangkok, but sometimes one of cashier does not work, then you can buy tickets in the next. Usually near the window immediately written fare, as well as the nearest bus departure time, which by default, and sells tickets. So if you are ready to go — just give money and specify the number of tickets. If you want to buy a ticket at a later time or on another day — tell the cashier. 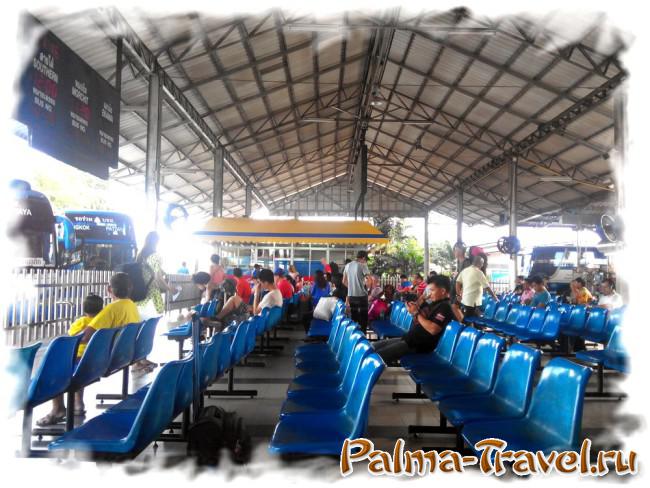 The waiting room at the North Pattaya bus station

The fare on the bus to the Eastern and Southern bus stations in Bangkok is 124 baht, while the price of a bus ticket to the Northern Bus Terminal — 133 baht. Higher in the latter case, the price is due not only to the large distance from Pattaya, but also travel on toll road (by the way, is now part of the road close to Pattaya reconstructed and expanded, so the movement speed drops significantly). Most of all I like to go to the Eastern Bus Terminal — the fastest and metro nearby, very saves time on vacation.

Please note: the last flight on Ekkamai bus station in Bangkok goes to 23-00 on the bus Mochit — already at 21-00, and South Bus Sai Tai altogether in 19-30 (in the latter case not sure, see schedule next to the cash register ). By the way, on the same bus station, in the 4th window office called Mukdahan (the name of the bus company), you can purchase a ticket on the yellow bus to Koh Samui (in the article «How to get to Koh Samui from Pattaya: all options» you can read about this bus and its price schedule for more details). 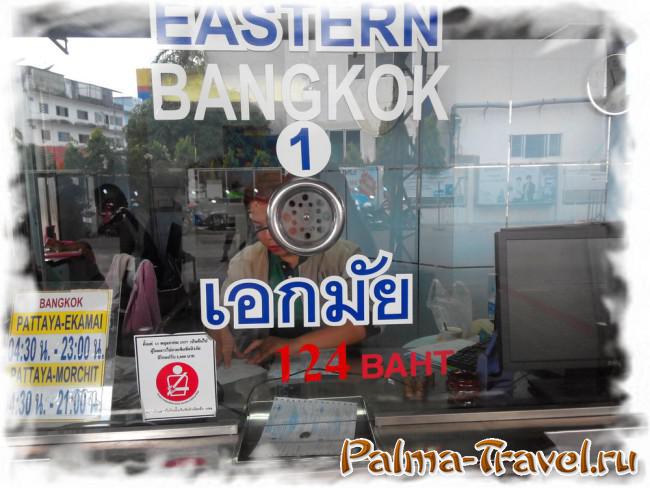 Having the ticket, you can wait for a bus in the waiting room, which is located later and to the right under the same roof. You can also buy drinks and snacks for the road, as well as a snack on site (there are a few tables and chairs). Given the fact that the buses run very often, waiting will not be long. Planting is done with platforms, the gate to exit to buses opens with the arrival of the latter. The hall will have a large electronic display, which provides information about the departure time of buses, their final destination in Bangkok and side number (the latter is usually imprinted in the ticket).

In buses available luggage space, but the distance between the rows of seats big enough for free placement of the feet and medium-sized backpacks. To avoid misunderstandings (and in my experience they happen almost every time), remember one rule: in Thai bus number indicated on the back seat. Many foreigners do not know this and take someone else’s place, followed by a mess. For example, in the photo below, you can think that I am and my girlfriend takes the place №5 and №6. In reality, we’re stay in the seats №9 and №10, which are written on the backs of the our seats. 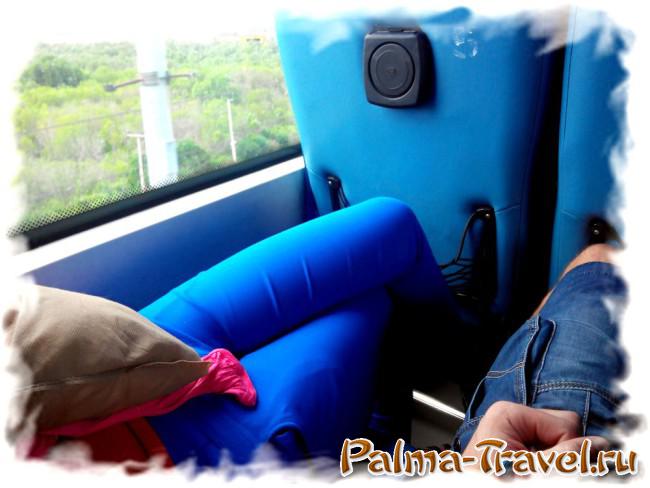 The most budget way to get from Pattaya to Bangkok alone (except for walking and hitchhiking) are Mini Bus and costs 98 baht. This type of transport is actively used by locals, so go such minibus quite often — every 20-30 minutes. At the same time begin to walk these white Toyota Mini Bus with yellow number signs in 06-00 am and ends at 20:00 PM. Landing on the right minibus carried out in the early Walking Street in Pattaya, in the area between the South Street Wallking Street and Second Road, and on the Second street near jewelry store Tharuthong Gold Shop. In the schematic map below points are marked respectively red, blue and green. 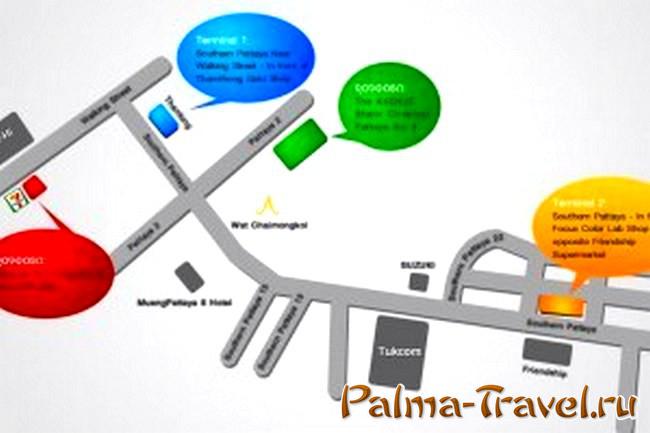 Unfortunately, I can not say which of these points is finite, because i used this Mini Bus just in the opposite direction and leave bus on Second Road. Logically, of course it Walking Street, but because the latter is covered for traffic at 18-00, better to look for Mini Bus to Bangkok in the evening on the other points. Mini Bus arrives at a small bus station in Bangkok near the metro station «Victory Monument». The location of the bus station I have described in detail in the article «How to get from Bangkok to Pattaya: all ways.» Ibid describes the main disadvantages of this transport, because of which I now prefer to use regular buses, though they cost a bit more expensive. 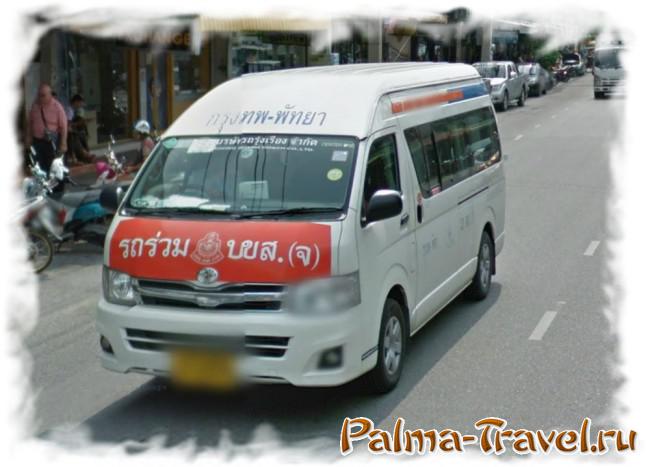